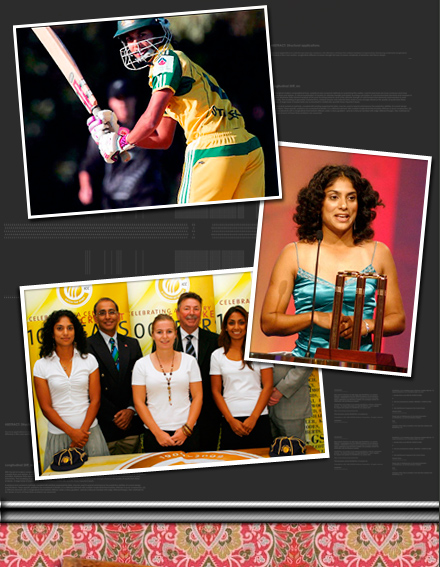 Lisa Sthalekar born in Poona, India, moved to Australia when she was 4. Lisa plays for Australia (Commonwealth Bank Southern Stars), New South Wales (Lend Lease Breakers) and Gordon Women's Cricket team. One of the key players in the team, she is a right-handed all rounder who bowls off spin and was rated as the leading all rounder in the world when rankings were introduced. She is the first woman to score 1,000 runs and take 100 wickets in ODIs.

Lisa made her debut in the Women's National Cricket League (WNCL) late in 1997–98 as a specialist bowler. It took her a number of seasons to go up the batting order and it wasn't until Belinda Clark left that she had the opportunity to open the batting in 2001-02. This was after she was called into the Australian team in 2001 for the first time. Playing as a bowler, she made her One Day International (ODI) debut against England and ended the tour of the British Isles with five wickets from as many matches.

In early 2003, she made her Test debut against England and made 120 not out, her maiden century, in her second match. One of her greatest highlights came when playing in the 2005 World Cup triumph in South Africa and scoring 55 against India in the final. In the 2007 Quadrangular series (top 4 nations) Sthalekar was named player of tournament scoring 394 runs at an average of 98.5. The other World Cup success came through the T20 format in 2010. Held in the West Indies, Australia played against New Zealand in a thrilling match that came down to the last ball. Sthalekar was named in the Team of the Tournament for her all rounder performance.

Lisa Sthalekar recently became the highest all time wicket-taker in the WNCL claiming 150 scalps, this is to go along with being the most capped player in the competition. She has also been part of 12 successful winning WNCL titles and lead the team to 5 successive titles.

Apart from cricket, Lisa completed a Bachelor of Arts majoring in Religious Studies and Psychology. She is currently working or Cricket NSW as the Youth Program Manager for female programs.